“If we have people doing all that work, our additive manufacturing industry is not scalable.” 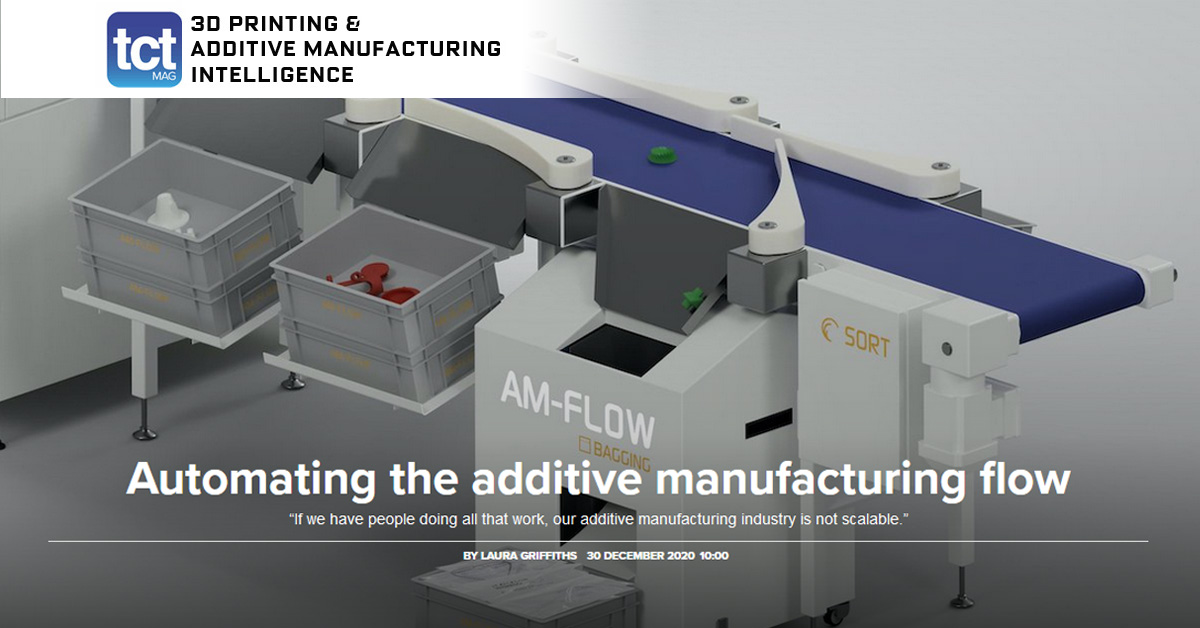 On our last Additive Insight podcast as a trio, our former TCT Head of Content Daniel O’Connor mused how, in his eight years in the manufacturing (AM) industry, the most significant developments he’d seen were that in the automation of post-processing. Those developments, he claimed, were an important part in enabling AM to graduate to mass production.

You’d think he’d been taking tips from AM Flow, a developer of automation solutions for AM post-production, which is aiming to do just that with a mix of AI- powered software and hardware solutions that address those end-to-end post- printing workflow steps.

“If you look at AM versus injection moulding […] injection moulding is a fully mature technology with fully mature automated processes around it. AM is by no means a mature technology, let alone this automated environment. We’re making baby steps in that area. I think these are just the evolutionary steps towards creating that end-to- end automation. […] The driver in this is cost and our cost price in printing as an industry is too high. On top of that, we’ve got things like lead times and quality. All of those issues need to improve for additive manufacturing to stake its claim. I think that automation is absolutely necessary.”

Carlos Zwikker, Commercial Director at AM-Flow made those comments in a conversation with TCT ahead of this year’s Formnext Connect where the Netherlands-based company had planned on showing its new AM BAGGING solution, the latest module in its growing suite of products, which now offers fully automated bagging and labelling of AM parts. It follows a now annual unveiling of AM Flow’s latest wares which began with the reveal of its AM VISION prototype in 2018, and last year, a first look at its AM SORT system.

AM-VISION sits at the core of AM Flow’s ‘stack’ to deliver part recognition based on geometry and overcome what the company has observed to be one of the most labour-intensive steps in the production process.

Once a part is identified, it can be put through the sorting system, picked using a robotic gripper and transported via the use of fully autonomous cobots, known as AM-ROUTE.

Zwikker continued: “Those are all sorts of modules that fit in the production line perspective but the essence is, we can identify it first because if you can’t identify parts, you can’t do all the other stuff.”

The problem, Zwikker believes, is that additive R&D has historically focused heavily on the printing portion of the value chain. While more attention has been paid to materials and software developments in recent years, AM Flow has taken it upon itself to tackle the other process steps which need to be considered in order to make additive a scalable production method. 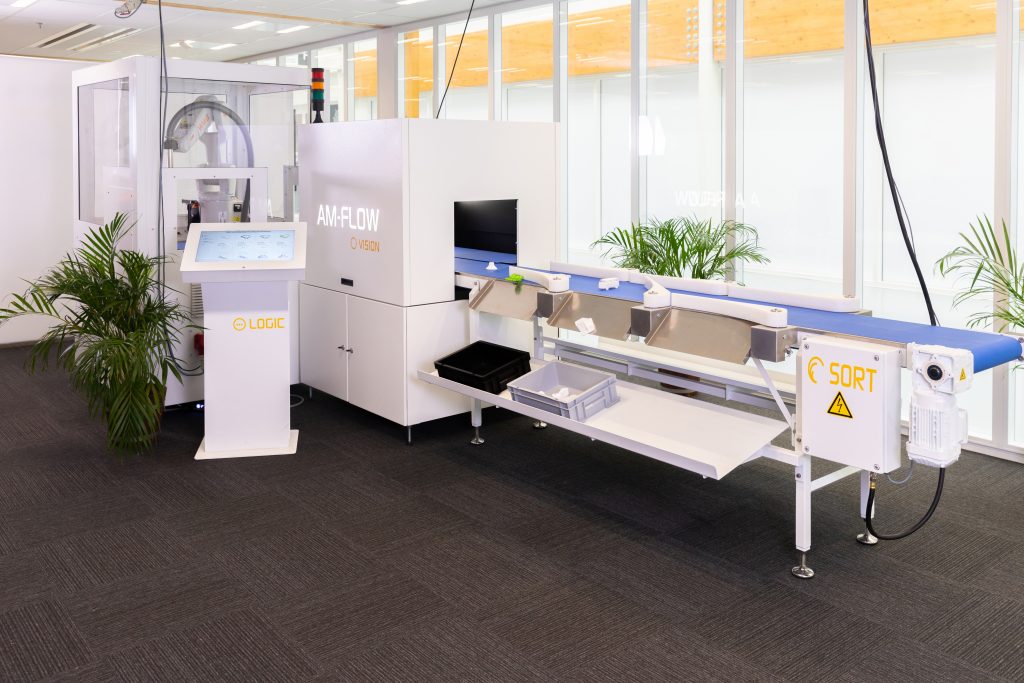 Zwikker points to the business models of well-known manufacturing providers like Materialise and Protolabs which are churning out high volume, high mix parts daily. Take a walk around Shapeways’ factory, for example, and the rows of bright white SLS printed parts neatly ready to be shipped to customers is astonishing. These kinds of operations have established efficient processes, such as optimal nesting, to build and deliver those different models to various clients. AM Flow wants to optimise those next steps that occur once a part comes out of the print and de-powdering stages and lands onto a sorting table.

“People start sorting with their hands, what is this piece? For whom? What needs to happen to it? Does it need to be polished? Or does it need to be coloured? Or does it go immediately into the DC?” Zwikker said. “That’s basically the big hole of post-processing that we’ve jumped into by saying, “look, we have to automate all those steps.” Because if we have people doing all that work, our additive manufacturing industry is not scalable. It’s going to be too costly.”

Given those production volumes, a leadership team with a background at Shapeways (AM Flow CEO Stefan Rink was formerly Shapeways VP of Global Manufacturing while Zwikker served as interim Chief Commercial Officer as recently as 2017), and the backing of companies including Materialise and Midwest Prototyping during a recent Series A funding round, naturally service providers would seem like an ideal fit for AM Flow’s technology. But Zwikker says there’s even more opportunity in AM operations inside other major manufacturing environments.

“We experienced first-hand what it means to have an enormous amount of orders, different customers, and how to process hundreds, if not thousands, of different pieces,” Zwikker said of the time he and Rink spent at the online 3D printing service provider. “So, it would seem that service providers are the logical sort of target but no, there is a lot more being printed at the moment by OEMs. BMW is already way beyond 1,500 pieces a day.”

The COO does, however, reinforce that service providers are a “core part” of AM Flow’s business and the company counts Shapeways, Materialise and Netherlands- based service provider Oceanz amongst its key customers alongside AM super users like BMW. Those types of customers have been a seal of approval for this type of technology, bolstered by a recent win in the Formnext Start-up Challenge which Zwikker described as a “validation of our vision and what we’re trying to achieve.”

In the company’s pitch for the award, Zwikker reiterated the belief that AM has focused on “workstation optimisation” rather than working towards “full end-to- end digital factories.” Asked how AM Flow fits into making that digital factory vision a reality, Zwikker said: “We have the same kind of vision, working towards a lights out factory. Ultimately now we’ve got a number of printers, and then it needs to flow through, and it comes in batches. What if we create an environment where you have 50 or 100 printers, [parts] all come out, it doesn’t matter what time of day, and you can process [them]? That’s the kind of environment we’re working towards.”

We use cookies on our website to give you the most relevant experience by remembering your preferences and repeat visits. By clicking “Accept”, you consent to the use of ALL the cookies. For more information read our cookie and privacy statementCookie settingsACCEPT
Manage consent